skip to main | skip to sidebar

Rehearsals for The Lost Happy Endings 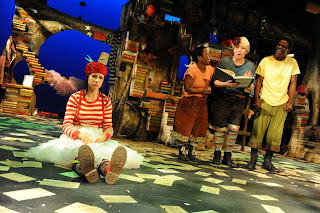 Red Earth Theatre begins rehearsals on 9 November for:
The Lost Happy Endings
based on the book by Carol Ann Duffy
This is a festive re-run of our 5 Star co-production with mac, Birmingham.
We have 2 members of the original cast returning for the show:
Caroline Parker and Toyin Omari-Kinch.
We're delighted that Emma Case and Kiruna Stamell will be joining the production this time round.
We're looking forward to creating some new magic for our audiences at mac.
Performances begin on:
Saturday 3 December and continue until January 7, 2012
Follow this link to mac's website for show times, ticket prices and booking information:
The Lost Happy Endings
Photograph copywright Robert Day
Posted by Theatre Company at 10:23 3 comments:

Dorothy Heathcote MBE, who has died aged 85, was a world-renowned teacher who revolutionised the use of Drama in Education through a variety of pioneering techniques.

It is difficult to grasp how the 14-year-old girl who entered a Yorkshire woollen mill to work in 1940 could become a key international figure in the world of education and drama and yet by the age of 24 she had become a lecturer at the Newcastle-upon-Tyne campus of Durham University, beginning a career that was to span 60 years. In that time she became the inspiration and role model for generations of teachers across the world who recognised in her unique approach the means by which to profoundly engage students and young people with their learning.

It was in 1945 that the headlines in the Yorkshire Post announced: ‘Weaver Gets Chance of Stage Career’ and, indeed, Dorothy trained as an actress, her fees paid for by the mill manager. But, much as she enjoyed acting, her vision extended beyond the stage to the use of theatre as an educational construct. She instinctively recognised the natural human predisposition to use drama as a means of exploring and understanding the world and of developing the fundamental life skills needed for it. With that recognition, Dorothy set herself the task of translating her vision into a classroom practice for all ages that continues to be inspirational to millions.

Her gift was in being able to touch people and give everything she knew away to those who were interested. Her legacy is that so many were interested and, standing on her shoulders, they continue the work of a genius who is for many, the greatest drama teacher of all.

Dorothy remained at Newcastle when it became a university in its own right in 1962. From the School of Education there, word of the charismatic young drama teacher soon began to spread. Her openness of spirit and radical, new pedagogy drew a stream of postgraduate students to Newcastle. She generously welcomed many into her own home and her husband, Raymond and their daughter, Marianne, became used to sharing the house with an annually changing group of temporary residents from home and abroad.

Dorothy created a whole school of drama practice based around the teacher shifting her pedagogy from that of an instructor to inductor, coach, facilitator and fellow artist, recognising the potency for learning of a co-creative process in which learners are empowered. She created a vocabulary of terminology such as drama for learning, drama conventions, teacher in and out of role, secondary role, Rolling Role, Chamber Theatre, Frame, Signing, Mantle of the Expert and Commissioning that is now in the canon of world-wide dramatic teaching expertise and curriculum models pioneered by her deeply held mission to bring joy and challenge into learning.

As her students returned to their places of work, Dorothy’s influence was carried with them and this precipitated an enduring torrent of invitations to work with children, young people, teachers and students across the globe. She accepted them, pioneering the use of drama as a learning process for the world in a wide range of contexts, for example, in townships such as Soweto in South Africa; in New Zealand with Maori communities; in the depths of inner cities in the UK, and in numerous countries throughout Europe, Asia, Africa, North America and Australasia. She also worked in borstal institutions in the UK and USA; in residential care homes and learning centres for people with significant disability; in special schools and with those who work with very vulnerable people. Even during her final illness, she found creative ways of contributing; through video-conferencing, for example.

However, wherever Dorothy was working in the world she always tried to catch the earliest flight home, and remained ‘Dorothy the home-maker’. Her heart was first and foremost with her family; to her neighbours and close friends she was always ‘Dorothy the cook, the bread-maker, the seamstress, the gardener’. She was famous for rising early to prepare for the day alongside her favourite cat and the AGA. She always had a book with her wherever she went, and was an avid letter writer. She loved family days out at National Trust properties and going to the theatre, and supported her granddaughter, Anna, in all her theatrical and dancing endeavours.

In Newcastle, her pioneering methods reached the Medical School where many films focussing on dramatic reconstructing of medical issues were used in the training of medics. Similarly, she became engaged with British Gas senior managers who had become aware of the methods and adopted structures using dramatic contexts to teach their managerial staff new skills for the workplace. This relationship was soon followed by others with Volkswagen, UK, the NHS and more recently with the Crown Prosecution Service and the professional theatre.

Dorothy’s was an endlessly engaged and enquiring mind with a creativity of thought that enabled her to see the connections between her work and that of others across a spectrum of disciplines. She was never complacent and until very shortly before her death was continuing to develop and refine her practice. This resulted in a richly textured pedagogy with a density of resonance that excited and inspired both the participants in her dramas and all those who strove and continue to strive to emulate them.

Her accolades have also been many, resulting in honorary doctorates from The University of Newcastle-upon-Tyne and the University of Derby; honours from and patronage of national and international professional bodies, such as National Drama and NATD; invitations to address the most prestigious gatherings, especially in New York; and of course through her writings and collaborations with her eminent students who had reached similar heights through her training. As early as 1974 the BBC produced a remarkable film about her practice, Three Looms Waiting, which can still be found on UTube. She was awarded an MBE in the Queen's Birthday Honours list on 11th June 2011, which she was due to collect at Buckingham Palace on 18th October. Knowing that she had already received the honour, it was her wish for her family - who have carried the name Heathcote forward through two more generations - to collect the medal posthumously.

Addressing a gathering of teachers she once remarked, “I shall look forward to death” and when people gasped she said cheerily “not in any morbid sense of course, but rather as looking forward to the greatest and most mysterious adventure of all”. Dorothy’s ‘adventure’ began on 8th October 2011 when she died as a result of the blood disorder, MDS.

Red Earth Theatre is the facilitating organisation for the simorgh network.

simorgh is a Midlands-based network. Our purpose is to creatively involve the mainstream sector in understanding and promoting d/Deaf and disability equality. We also support the commissioning, production, programming and curation of inclusive arts.

Are you a d/Deaf or disabled visual or performing artist keen to develop new work?

Do you live or work in the Midlands?

We are looking for d/Deaf or disabled artists to:

· £500 per artist towards expenses

Ideas Tap: an event at which emerging d/Deaf and disabled artists, across a range of forms, prepare to pitch ideas for new inclusive art works to producers, programmers, curators, arts companies.

Send us your name and contact details. We’ll ask about you and your ideas. No forms to fill in. Contact:

Posted by Theatre Company at 05:35 No comments:

Red Earth Theatre and mac Birmingham are reviving their fabulous show The Lost Happy Endings for the autumn/Christmas season.

We are looking for:

You will also be an ensemble member (in a cast of 4) with the following skills/experience:

• A commitment to working in an integrated and inclusive company

Pay based on Equity/ITC minimum.

Red Earth Theatre is delighted to have been awarded National Portfolio funding from Arts Council England.
This is an exciting opportunity for us to continue our work with partners across the Midlands and nationally and to develop dynamic and inclusive theatre that reaches wider audiences.

We feel very sad about the loss of funding to many strong and creative organisations, to colleagues and friends.
The impact of this government's cuts to the arts, coupled with cuts in public funding for humanities teaching in higher education and the absence of the arts from the new baccalaureate, will be most acutely felt by children and young people - the lifeblood of our cultural future.

"Of all the cuts, those to libraries and the arts are particularly heartbreaking. It's in places such as libraries and theatres that people learn to think of new ideas, and dream of different ways of living."
David Peace, novelist
Photo copyright Robert Day
Posted by Theatre Company at 10:51 1 comment: 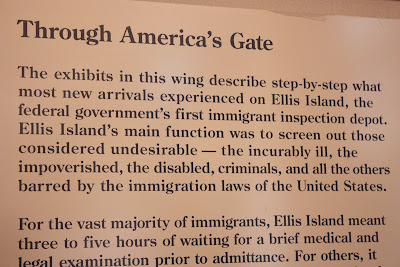 simorgh - a network supporting access and inclusion in the arts - is hosting a symposium at Arena Theatre Wolverhampton on May 10th, 2-5pm.
The core members of the network will be welcoming new recruits, launching phase 2 of the network's development and sharing their personal and collective learning of an 18 month leadership project funded by Meeting the Challenge (Cultural Leadership Programme). 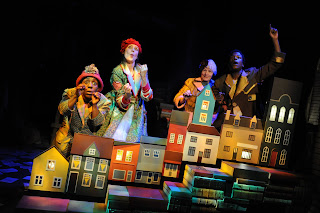 Photo copyright Robert Day
We're delighted to announce that The Lost Happy Endings, co-produced with mac Birmingham, is to be revived at mac this Christmas prior to a national tour. So ...
"Once upon a perfect," ( 5 stars, The Birmingham Post) becomes
"Twice upon a perfect"...
(And, since in all good fairy tales, things happen in threes, a tour makes it thrice!)
Tickets soon on sale at mac. See website link.
Posted by Theatre Company at 03:27 1 comment: